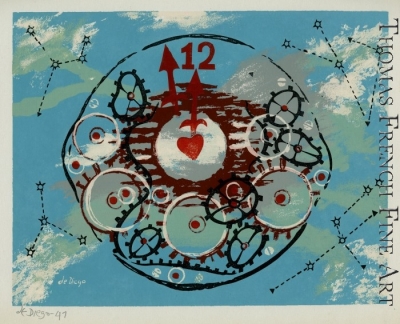 Estate of the artist

An important American screenprint, showing the growing awareness of the dangers of the Atomic age and nuclear bombs. Anthony Griffiths of the British Museum characterizes this image as "a Surrealistic vision of the doomsday clock."

Done while the artist was in Chicago or New York.

Julio de Diego crafted a formidable persona within the artistic developments and political struggles of his time. The artist characterized his own work as “lyrical,” explaining, “through the years, the surrealists, the social-conscious painters and the others tried to adopt me, but I went my own way, good, bad or indifferent.” His independence manifested early in life when de Diego left his parent’s home in Madrid, Spain, in adolescence following his father’s attempts to curtail his artistic aspirations. At the age of fifteen he held his first exhibition, set up within a gambling casino. He managed to acquire an apprenticeship in a studio producing scenery for Madrid’s operas, but moved from behind the curtains to the stage, trying his hand at acting and performing as an extra in the Ballet Russes’ Petrouchka with Nijinsky. He spent several years in the Spanish army, including a six-month stretch in the Rif War of 1920 in Northern Africa. His artistic career pushed ahead as he set off for Paris and became familiar with modernism’s forays into abstraction, surrealism, and cubism.

De Diego arrived in the U.S. in 1924 and settled in Chicago two years later. The artist established himself with a commission for the decoration of two chapels in St. Gregory’s Church. He also worked in fashion illustration, designed magazine covers, and developed a popular laundry bag for the Hotel Sherman. De Diego began exhibiting through the Art Institute of Chicago in 1929, and participated in the annual Chicago Artists Exhibitions, Annual American Exhibitions, and International Water Color Exhibitions. He held a solo exhibition at the Art Institute of Chicago in the summer of 1935. Though the artist’s career was advancing, his family life had deteriorated. In 1932 his first marriage dissolved, and the couple’s young daughter Kiriki was sent to live with friend Paul Hoffman.

De Diego continued to develop his artistic vocabulary with a growing interest in Mexican art. He traveled throughout the country acquainting himself with the works of muralists such as Carlos Merida, and also began a collection of small native artifacts. While in Mexico, de Diego made a living designing costumes and scenery for ballets. His talents continued to expand as he moved into book illustration, and his work in jewelry making was incorporated into the 1946 Modern Handmade Jewelry exhibition at the Museum of Modern Art. He remarried in 1948, becoming the third husband of Gypsy Rose Lee. The following year the two joined the traveling carnival Royal American Shows. While Gypsy worked as a performer, de Diego developed a show for the carnival using surrealist murals and the performance of Freudian themes. After three years of separation, the couple divorced in Reno, Nevada, and de Diego eventually settled in California.

De Diego’s continued to impact the world of fine art as he produced interpretive representations of current events in an assortment of techniques. He notably worked in the Renaissance method of “velatura,” building up to as many as forty glazes of oil in each painting. He also commonly worked within gouache, graphite, and mixed media. The themes of his work were as broad in scope as the mediums he worked in, moving from surrealist and folk compositions to self-portraits and politically engaged subjects. In the time spent working for the Works Progress Administration, de Diego produced murals of landscapes and street scenes. Afterwards he

pushed away from such brands of realism, asserting, “you can’t transfer nature to canvas, you have to re-invent it.” His paintings of current and historical subjects became constructions both of the artist’s opinion of the facts and his vision of alternate realities. He reacted to natural disasters, produced works on World War II in a manner echoing Goya’s Disasters of War, explored the theme of atomic energy, and commented on the impact of the Cold War. His 1962 Armada series paralleled the use of technology in past and present conflict and explored the notion of defeat. The works played on apocalyptic fears of the Cold War period by invoking the infamous tragedy of the Anglo-Spanish War as well as the ultimate survival of both sides. De Diego expanded his political impact beyond the exhibition of these works, and began voicing opposition to Franco and the rise of fascism. He was a strong supporter of the radical American Artist’s Congress, which spoke in opposition to censorship and the curtailing of rights in Italy and Germany. During these years de Diego also became a teacher and took up positions at the University of Denver and the Artist Equity Workshop.

De Diego settled in the artists’ colony of Sarasota, Florida, in the late sixties and remained there until his death on August 22, 1979. Reports of his years there recounted him as an animate character who entertained with tales of past encounters with famed Surrealists Andre Breton and Max Enrst, the artist Man Ray and influential Peggy Guggenheim. De Diego continued to expand his repertoire by producing the educational film Julio de Diego—Painting in Egg Tempera with the help of local resident Jay Starker. Throughout his years, life and art remained codependent entities within the artist, who noted, “A painting is not what it is, but the memory that we have a life.” Julio de Diego’s works capture the sweeping vision, ambition, and passion of a curious and multifaceted artist.

Please provide your name & email address and we will contact you about this product when its most convenient for you. Provide your phone number in the optional comments area for a more immediate response.

All form fields are required.