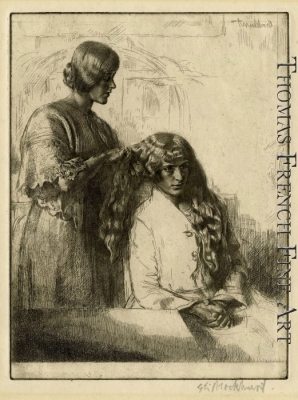 Born in Birmingham, England, Gerald Brockhurst was hailed as “a young Botticelli” in 1902 when he was only 12.  Brockhurst fell deeply under the spell of Piero della Francesca, and consciously evoked the quattrocento tradition of setting his figures against spare landscapes and sky.   By the 1930s, Piero was perceived anew as a magic realist, and his work finds echoes in Otto Dix, Grant Wood, Balthus — and Brockhurst.

In 1932, Brockhurst produced one of his most famous works, a near-photographic etching, Adolescence.  In Britain, it was a positive scandal to show a picture of a 16-year-old nude, no matter that the private parts were in deepest shadow.  The furor over Brockhurst’s 15-inch-high etching is said to have necessitated his 1939 move to America. He became an American citizen in 1949.

Brockhurst had taken up etching in 1920, making it his favorite medium until 1947, when he completely abandoned printmaking.  He earned his living painting “society portraits,” and painted such notables as Marlene Dietrich and the Duchess of Windsor. He said he sought to record appearance, not character.

Central to his work is female beauty presented in detailed observation and with technical perfection.  His women are mysterious, complicated and exciting, reflecting the artist's understanding of artistic traditions, portraiture, and the expression of allegory in the female image.  His favorite subject in the 1920s was his exotic wife Anais, subject of such works as L'Eventail (1921) and The Black Silk Dress (1927).

In 1929, he fell in love with model Kathleen Woodward, the sitter for his scandalous etching Adolescence.  Kathleen became his second wife after he obtained a divorce in 1939, and the two moved to New Jersey.  Kathleen died in 1995.  Brockhurst himself died in Franklin Lakes, New Jersey, in 1978.

Sources include: Peter Hastings Falk (ed.) Who Was Who in American Art & www.thebrockhurstcollection.com (Daniel and Rosalyn Jacobs)

Please provide your name & email address and we will contact you about this product when its most convenient for you. Provide your phone number in the optional comments area for a more immediate response.

All form fields are required.