Ray H. French: The Evolution of an Artistic Innovator

Printmaker, painter, and sculptor Ray H. French was born in Terre Haute, Indiana on May 16, 1919. Terre Haute was a cultural wasteland before the opening of the Sheldon Swope Art Museum in 1942. Thus, with a father as a coal miner and carpenter, art remained a luxury for Ray. Nevertheless, local art teachers Mabel Mikel Williams and Nola E. Williams helped to foster his creativity and unshakable drive to create things of beauty.

After high school, Ray attended the John Herron School of Art in Indianapolis. His studies there were interrupted by the outbreak of World War II, during which he developed surveillance photographs for the Army Air Force. After the war, Ray transferred to the University of Iowa on the G.I. Bill, where he received both his BFA and MFA degrees. The University of Iowa during the 1940s was a cultural mecca with many major art historians and artists. While in Iowa, Ray played an important role in this culture by becoming a founding member of the Iowa Print Group under Mauricio Lasansky.

Following his graduation in 1948, Ray experienced firsthand the rapid rise in creative printmaking in America. By 1949, he had exhibited at The Brooklyn Museum, the Walker Art Center, and MOMA New York.  Ray’s early style of printmaking is characterized by pure line engraving on copper plates, a technique suited perfectly to his study of the beauty of animals. This charming and whimsical subject ran counter to the concurrent trends of Lasansky’s horrors of war and Hayter’s non-objectivity, but was equally effective in capturing the public’s attention. Walruses was purchased by the Victoria and Albert Museum, exhibited at MOMA New York and received the Arthur D. Allen Memorial Purchase Prize for its “skillful and economic use of line.” Shortly thereafter, Ray’s treatment of animals developed further into larger format mixed intaglio prints utilizing hard ground, soft ground, etching, and engraving, as exemplified in The Swan.

By the late 1950s, Ray’s style evolved into organic non-objectivity, in which he incorporated personal autobiographical vignettes and symbolism. His work during this time was further characterized by a departure from the traditional squared compositional format to his cutting and rounding of the plate to accentuate organic shapes. Ray’s 1959 Enchantment remains particularly illustrative of his use of etching and soft ground intaglio. Enchantment was successfully exhibited at the Brooklyn Museum of Art for the 12th National Print Exhibition of The American Federation of the Arts and received the Pennell Purchase Prize from the Library of Congress in 1960.

In the 1960s, Ray also started to focus on blind embossing, which he had first experimented with at the University of Iowa. He was extremely prolific and successful with this medium, selling hundreds of prints in small editions of 10 through the Associated American Artist Gallery in New York. In 1966, Ray built upon his mastery of embossing and began developing a shadow box presentation called a graphic construction that combined color, blind embossing, and multi-layered cutouts to revel intaglio compositions. Noted curator William Lieberman purchased Ray’s masterpiece graphic construction, Moon Rays, on the behalf of MOMA New York and another impression was gifted to the University of Iowa Museum of Art by Alan and Ann January in 2004.

Throughout his artistic career, Ray was also a professor and administrator at DePauw University, which occupied much of his time. Outside of his creative expression, Ray was most proud of his teaching and influencing students to find beauty in their daily lives. Specifically, he was a particularly fervent advocate of printmaking and joined the ranks of many of Lasansky’s students who went on to establish printmaking programs and departments and to further lift the stature of intaglio printmaking. During Ray’s time at DePauw, he received grants to travel around Europe. His yearlong stay in Florence led to a series of etchings, drypoints, and woodcuts of Italian and Etruscan subjects and provided inspiration for many years.

In 1984, Ray retired from his university service to work in a private studio behind his home on DePauw’s campus. After several life threatening illnesses, Ray decided to return to his early creative style of realist depictions of nature and landscape. Eventually, Ray’s health deteriorated further with the onset of macular degeneration. Legally blind, he continued to create art until shortly before his death in 2000 at the age of 80. “Sometimes when I look at a work I create, I am amazed at what inspired it. I ask myself, how on earth did I create this?” said Ray once. Ultimately, this quest to find beauty and create inspiring works of art provided the greatest source of Ray’s happiness and fulfillment, evidenced by the breadth and quality of his artistic legacy. 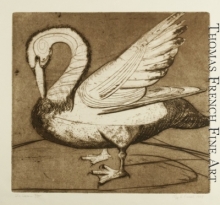 Daphne and Chloe by the Lake 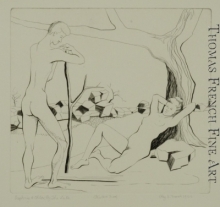 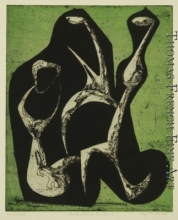 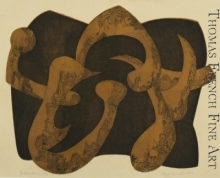 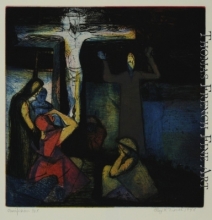 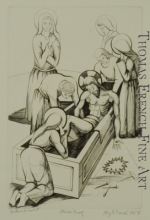 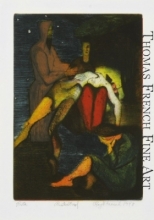 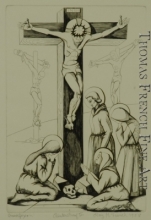 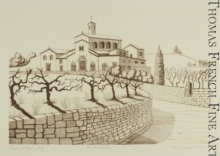 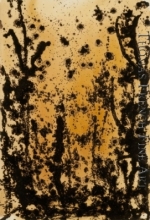 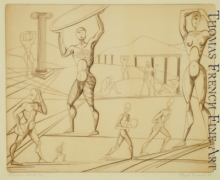 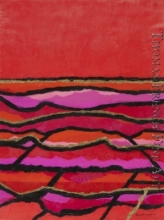 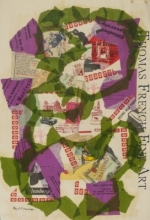 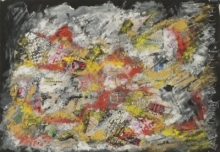 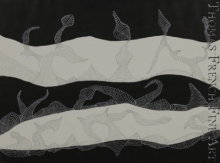 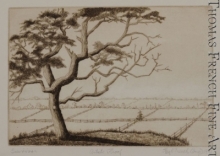 Homage to the Square 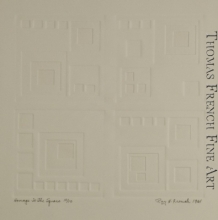